Monks knows a thing or two about volatility. Founded in 1929, the Trust was only months old when the Wall Street Crash brought the Roaring Twenties to an abrupt end. The bank that launched the Trust went bust, leading to Baillie Gifford’s appointment as manager in 1931. Acceptance of the shifting fortunes of markets is in with the bricks at Monks.

Having been in the management hot seat myself since April 2021, I’ve gained some insight into the experiences of my earliest predecessors over the past few months. The flight from stocks seen as having long-term growth potential to those whose value lies more in the here and now has left Monks’ performance lagging.

Yet despite fallen markets, I see this period as a long-term opportunity rather than a signal that something has gone wrong with our way of investing.

At the heart of Monks’ patient approach to long-term capital growth lies our belief in diversity. We don’t rely on a single definition of what ‘growth’ means. Instead, we pick a combination of company types:

This mix is diversified across different industries and different parts of the world. And with valuations tumbling, we’ve been spoilt for choice when it comes to finding new places to allocate capital. The following are some examples of companies we’ve recently invested in.

Best known for software that turns fi les into portable document format – PDFs to you and me – solid stalwart Adobe produces a range of programs for creating, managing and marketing documents, images and videos.

A publisher that first signs up to use its InDesign desktop publishing software for a magazine might then graduate to Photoshop for handling images and Illustrator to create website graphics.

Rather than buying discrete software applications, individuals and institutions subscribe to a suite of Adobe’s programs, making those customers ‘sticky’ and bringing in the repeat revenues that make the company so good at compounding growth. Customers come to rely on its software, allowing the business to make healthy returns.

We’ve admired Adobe for a long time. The falling market over the past few months has made it much more attractive and given us the right entry point.

The ability to pick quality stalwarts at the right price is key to Monks’ long-term strategy. Once they’re locked in, we sit back and let the magic of compounding happen.

Nexans: from ‘picks and shovels’ to ‘wires and cables’

Founded in 1897, this sprawling French conglomerate once made cables for everyone from car producers to construction firms. It became known as Nexans in 2000. Now it’s moving from being an industrial generalist to being a renewable power specialist.

Since taking over as chief executive in 2018, Christopher Guérin has been busy selling off the low-value, commoditised parts of the business to exploit the disruption potential of the great green energy transition. Under the slogan “Electrify the future”, the group aims to cover the whole electrification journey, from mining the copper to providing monitoring software for cables.

While there may be questions over the timeframe for the transition, the direction of travel is clear. The ‘picks and shovels’ stocks that enabled the coal, gas and oil industries to grow are giving way to the ‘wires and cables’ investments that will connect hydro, solar and wind power generators to the grid and allow users to harness that power for cooling, heating and transport.

Guérin is the perfect example of a manager reallocating capital to focus on exploiting an opportunity. We expect this 125-year-old business to mimic the rapid growth rate of a disruptive startup.

Good capital allocation is central to Royalty Pharma, one of Monks’ most recent purchases. Drug owners receive royalty payments from manufacturers that produce and sell their medicines.

You can think of it in two ways. It’s either the most profitable drugs company in the world, turning between 80 and 90 per cent of its turnover into profit because it doesn’t have expensive research and development assets, or it’s a specialist investment fund with a long-term outlook.

The company takes the capital it receives from its existing royalties and reallocates it to the most promising drug development projects. As the cycle turns, those new drugs then hit the market, generating royalties themselves and allowing the cycle to repeat.

Royalty Pharma is addressing a funding gap for biotech businesses. That gap is likely to widen as interest rates increase and traditional capital becomes harder to access. Its specialism gives it more credibility in the market than the standard investment banks. 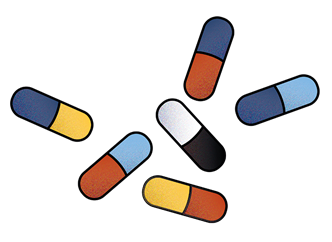 That’s why such a big part of my role is sitting on my hands. In tough times like these, the priority is to keep scanning our five-to-ten-year time horizons and not allow negativity to creep in.

Having a diversified and deliberately balanced portfolio allows Monks to manage the uncertainty that change brings. It’s that breadth of vision that allows us to navigate volatile periods and focus on the long term.

Annual past performance to 30 June each year (%)